David Rabbitt is a longtime Petaluma resident, father and former small business owner who embarked upon his public service career while his children (Megan, Patrick and Sarah, all of whom are now grown up) were attending McNear Elementary School.  His passion to improve the educational experience for his children and all our community’s youth led to his first campaign for a seat on the Board of Directors for the school’s Parent Teacher Association (PTA), where he was elected and went on to serve two terms as PTA President.  During this time, David worked with the PTA and educational leaders to help establish the Fund Development Task Force for the Petaluma City School District, while also serving on two campaign committees to pass school bonds to improve Petaluma’s public schools.  In an effort to improve the well-being of young schoolchildren, David also co-founded a program known as “SHAKE” (Support Healthy Active Kids in Education) to create strong physical education and nutrition programs in local elementary schools.  Beyond David’s work with our local schools, he spent several years as a baseball and soccer coach for his kids’ sports teams, and served on the Board of Directors for the Petaluma National Little League and Sonoma County Alliance Soccer Club.

In 2006, David Rabbitt was elected to the Petaluma City Council, joining the Council shortly before the onset of the Great Recession.  His work as a Council Liaison for the Airport Commission, Animal Advisory Committee, North Bay Watershed Association (NBWA), Planning Commission, Recreation, Music, and Parks Committee, and as an appointee on the Sonoma County Health Action Council provided him with a broad understanding of the many issues facing our community, and how local leaders could make a positive impact to improve our quality of life.  This, coupled with the economic crisis that swept Petaluma, the county and the nation beginning in 2008 and 2009, provided David with a well-encompassed skill set to not only address important quality-of-life issues, but learn to do more with less and stretch limited tax dollars to maximize budgetary and operational efficiencies amidst the worst economic crisis since the Great Depression.

In 2010, David Rabbitt was elected to the Sonoma County Board of Supervisors as the County’s 2nd District representative, encompassing all of the City of Petaluma and City of Cotati, a portion of Rohnert Park, and the unincorporated communities of Penngrove, Two Rock, Bloomfield, and a portion of the unincorporated community south of Sebastopol.  Much of the dairy industry is located in the 2nd District, as well as a large portion of land fronting San Pablo Bay.

Since joining the Board of Supervisors, David served two consecutive terms as Board Chairman in 2013 and 2014 before going on to win re-election in 2014 and 2018. As David entered his third term, he was appointed to his third term as Chairman of the Sonoma County Board of Supervisors in 2019. In addition to his service as our 2nd District Supervisor, David has also served in several other leadership roles at the county and regional levels, including service as: 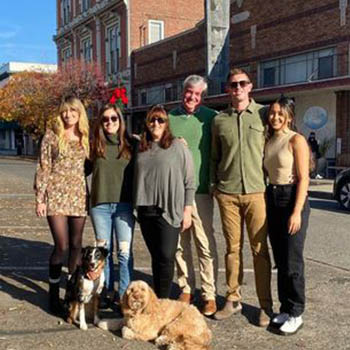 David Rabbitt graduated with an Architectural Degree from the University of Oregon.  He and his wife, Jane, a Clinical Nurse Specialist in Neuro-Oncology at UCSF, reside near McNear Park in Petaluma.

“No one has worked harder or got more done for Sonoma County than Supervisor David Rabbitt. He is widely viewed as the Board of Supervisors’ most steady and stable hand, and has delivered for all of us, not only on agricultural issues, but also on issues including road repair and improvement projects, public transportation, housing and so much more. When I think of someone who gets things done for Sonoma County, David Rabbitt is the first person that comes to mind. We need his proven leadership on the Board of Supervisors now more than ever.”
- Marilyn Herzog, 3rd Generation Petaluma Dairy Farmer